Olympia De Castro is an investor focused on shifting capital toward environmental, social and corporate governance (ESG) and impact investing.

She serves as Board Advisor to Gratitude Railroad, a community of investors “inspired and dedicated to solving environmental and social problems through the profitable deployment of financial, intellectual and human capital.”

Olympia has two decades of experience in investment banking, investment management and impact investing, and is passionate about advancing sustainable finance in the U.S. and globally.

Olympia is a Partner at Social Venture Philanthropy, where she supports venture philanthropy seeking to strengthen and scale local social ventures. In this capacity she is engaged in exploring innovative structures to catalyze impact investment dollars to advance these philanthropic efforts.

She is also a Council Member at GLG, specifically on the social impact front, where she advises GLG corporate clients looking to build initiatives in the ESG and impact sector.

Olympia’s range of efforts reflects the need for a growing convergence towards sustainability goals from different capital providers and stakeholders.

Olympia started her career at Goldman Sachs in the Investment Banking and Investment Management Divisions. Olympia worked for Louis Berger Group where she advised multilateral organizations and governments in the financial analysis of infrastructure projects.

Olympia began her career in economic development and impact investing working at the International Financial Corporation (IFC), the private arm of the World Bank, under the Global SME Banking group. In this capacity Olympia supported efforts to expand global access to finance for micro- small- and medium-sized enterprises, through policy initiatives, research and active engagement with banks.

Olympia has a variety of work experience in the emerging markets. This includes her work in Chennai, India at IFMR Capital, a spin-off of ICICI Bank, where she focused on securitization of microfinance loans. In Nairobi, Kenya, and Kigali, Rwanda she provided advisory on valuation and strategic exit alternatives to Aureos Capital’s investments in East African microfinance institutions. In Fortaleza, Brazil, Olympia constructed a Monitoring and Evaluation tool to measure outcomes for Instituto Palmas, a community-led social development bank among a network of 52 similar community banks to offer its own social currency in an effort to stimulate the local economy. Olympia later presented the framework to policy-makers, including the Central Bank of Brazil, and leading academia as they weighed the social benefits of the program with the non-conventional addition to M2, money supply.

In line with her goal of optimizing capital for impact, Olympia De Castro has supported many nonprofit organizations that she believes provide compelling positive multiplier effects on outcomes.

TECHO — a youth-led nonprofit organization dedicated to ending poverty by transforming slums in Latin America into organized, sustainable communities. With over 1 million volunteers to date, TECHO mobilizes local youth to construct transitional housing and develop community-based support programs. With presence in 19 countries in Latin America, TECHO inspires the youth to change the status quo. Through its volunteer build trips and community organization efforts, TECHO brings dignity to the families it serves, while promoting empathy and humanizing poverty, inspiring youth volunteers to forever make a difference toward this shared goal.

Olympia volunteered in a variety of capacities to raise money and promote awareness of TECHO. She sponsored build trips to Cartagena in 2012 onwards, the first of which resulted in the opening of the Cartagena office and to other countries like Costa Rica that Olympia participated and supported a build trip in 2016..

In partnership with her friends and family, Olympia hosted over seven TECHO dinners and galas that, in addition to raising money, inspired friends and family to join in the long-term effort of advancing the cause.

AptART (Awareness Prevention through Art) — a nonprofit organization of artists and activists that use street art projects in conflict affected areas to help the communities stay positive in a negative situation. The organization empowers marginalized youth to create art to gain experience and express themselves.

Olympia curated an art exhibit to bring awareness of the plight of Syrian refugee families, especially children. Exhibit visitors walked through the gallery in a multi-sensorial experience of the trajectory and hardships endured by those affected by war. The exhibit culminated in a bright room filled with colorful art by the refugee children themselves; breathtaking photographs of their lives; and works by established artists who supported the program and spent time with the refugee children. Proceeds from the exhibit art sales helped fund three art mural walls in Lebanon, where Lebanese, Palestinian and Syrian children united to play, collaborate and express themselves through the common medium of art. Among other outcomes, this project supported Article 31 of the United Nations Convention on the Rights of the Child: “Every child has the right to rest and leisure, to engage in play and recreational activities appropriate to the age of the child and to participate freely in cultural life and the arts.

After obtaining her B.A. in finance, Olympia earned an M.I.A. in Economic and Political Development from Columbia University’s School of International and Public Affairs.

Olympia was nominated for the LendIt Fintech Woman of the Year award in both 2017 and 2018 for her work at CIM supporting women in business. 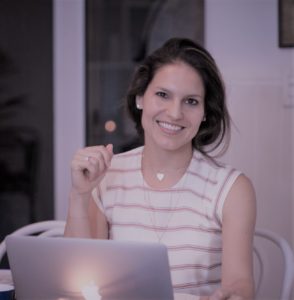